This year being more than 'half course through its run,' I'm in a reminiscing mode. Or maybe this happens more as you age. A better file to rifle through?
I reflected on a comment shared by a show Director. He was told: 'they really liked my work' but were surprised to learn 'I wasn't a young artist.' They thought I was more 'hipper' than 'geezer.' Guess not.

Hints are offered when viewing artwork. And many opinions assumed by viewers. There are no wrong answers; make of it whatever your imagination wants. Until you float back into reality.

I love Matisse's cut outs. So bright, uncomplicated, childlike. He didn't start this technique until ill, 15 years before his death. Who'd know?

Maybe the soul comes through when creating art. It is a form of communication. Just depends on the receiver's interpretation -  and a timeless meeting of the minds?
Posted by Robin Kent at 10:32 AM 4 comments:

Just when I was wondering if I should take a welding course and mix it up a little, fate in the form of a benevolent fellow with a woodlot, steps in. It is not unusual for me to be given relics from local citizenry. They know I might be able to incorporate their gifts and I appreciate the offer, but its been years since I've had such a large donation.
And the picture doesn't show the rest of the piles. When people ask 'how's your garden?' I think 'I grow weeds and am starting a lumber yard.' My tomato plants are feeling the pinch. The weedwacker is getting used more than the mower. I think about where to stack this for overwintering. Should I hire somebody to help. So many sides to the process before the dainty part of assembling, painting, and displaying.
Guess fate answered any questions about changing mediums. Maybe hinting for me to go large scale? 'Go big or go home' comes to mind. But wait, I am home.
Posted by Robin Kent at 9:45 AM 2 comments:

Not having a broad choice of television viewing options, I'm so glad the Summer Olympics are on. It brought out memories when as a child, I had abundant energy and felt I could do anything.
My favorite was Track and Field. Spoken by one who now thinks a fast walk is a sprint.
How many athletes had names that described what they do. Americans Trotter, Gait(lin), Miles. The amazing star in quickness and theater was Bolt from Jamaica. Another Muhammed Ali in the making. Such bravado. Wonder what if his name had been 'Pokey.'

I loved the rivalry between the long distance runners of Ethiopia and Kenya. Beautiful to watch their fluidity of form.

Maybe my newly acquired walking habit makes me a child in the universal athletic family, too. I'm not running, however I've learned to walk again.  But oh, to show such grace while doing it.
Posted by Robin Kent at 8:32 AM 7 comments:

The Poignant Side of Funny

Liking poetry for the chance to chew on words slowly, a blog I silently follow called 'The Rain In My Purse'  http://theraininmypurse.blogspot.com/ gives me a full course dinner.

I chuckled at the poem she mentioned called 'What Narcissism Means to Me' by Tony Hoagland, published by Graywolf Press. Never aware of that phrase before - if it is one - (I don't get around much), I had to read it.

Comedy and Tragedy being so connected, I wonder why they aren't thought of as a unit more often. Like twins separated at birth, or sweet complementing spicy, or Woody Allen, the hidden poignant factor helps - in a strange way - find that funny side of life.

I think laughing, or even a fleeting grin, is a way we unconsciously give thanks for being part of the act.
Posted by Robin Kent at 8:08 AM 5 comments:

Robin Kent
My work is one of a kind Contemporary Folk Art. I create paintings, wood sculpture and assemblages in this manner. Always involved in the visual arts, I have been: a community college and public high school art teacher, graphic designer, advertising copywriter, commercial art director, and at this point a contemporary folk art /fine artist living in Vermont. Who knows what's next? All images are ©2013 robin r kent

Where Else You Can Find My Work: 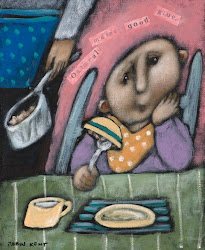